Why perform thermal shock testing instead of or in addition to temperature cycle testing?

Temperature cycle testing is used to stress a product at temperature extremes, focusing on failure modes due to mismatch of thermal coefficients. Thermal shock testing, on the other hand, is meant to accelerate failure modes due to very rapid changes of temperature (less than 10 seconds liquid-to-liquid). Examples of these conditions include hand or wave soldering, self-heating of power semiconductors or turn on of optical devices. There are two thermal shock tests typically utilized: liquid-to-liquid and air-to-air.

Liquid-to-liquid thermal shock testing is most severe because of its rapidly induced thermal rate of change due to the use of conduction. Thermal shock is usually specified for 15 cycles and a minimum dwell of 2 minutes. MIL-STD-883 specifies three temperature ranges for Thermal Shock: 0 to 100°C, -55 to 125°C, or –65 to 150°C. Telcordia GR 468 specifies a range of 0-100°C, which can be performed in water. 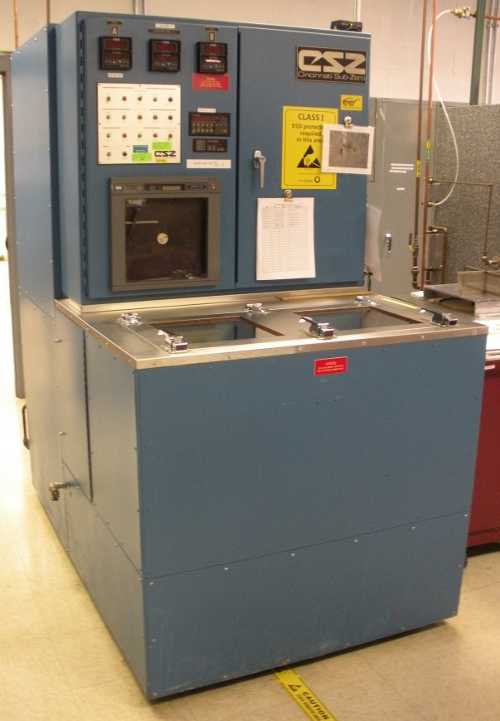 The two higher ranges require the use of a perfluorocarbon fluid with a low freezing point and high boiling point. ORS uses a proprietary solution which has a useful range of –97 to 175°C, in both hot and cold tanks. The basket, which holds the parts being tested, switches from one tank to the other in eight seconds. It returns to the load/unload position automatically after the specified number of cycles.

Air-to-air thermal shock testing is used for parts that cannot be immersed in liquid or when slower rates of change are appropriate. Air-to-air testing modifies the temperature cycle by convection, a considerably slower heat exchange process than by conduction.

In both thermal shock test procedures, transition times (hot-cold and cold-hot) are typically the same, usually less than 10 seconds.