Resistance to solvents testing determines the ability of a device to withstand exposure to solvents. The goal is to ensure that solvents do not cause deleterious, electrical or mechanical damage, or the deterioration of the material or finishes. Marking permanency deals with the ability of ink to stay on a device.

Solvent resistance testing consists of immersing three groups of devices into one of three solvents for a minimum of one minute. After fully immersing a device, it is removed and brushed with ten strokes across the portion of the device where marking has been applied. This is repeated two additional times. After the third immersion and brushing, the devices are rinsed and all surfaces air blown dry. After five minutes, the devices are examined for any damage such as missing, faded, smeared or blurred markings, which is considered a failure in a solvent immersion test. 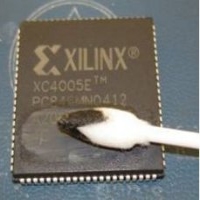 Oneida Research Services in Reading, PA has held Commercial Laboratory Suitability Status for MIL-STD-883, Method 2015 Resistance to Solvents testing through the Defense Logistics Agency (DLA) for over a decade.

Let us help you determine if your device can withstand exposure to solvents.